skip to main | skip to sidebar

today i caught up with my friend Clay who i meet when he was in Australia earlier in the year. he drove out from BC with some friends to hang out for the day. after an adventure filled trip to chinook mall (we got pretty lost and then more lost cos of roadwork!) we braved the large mall and shopped more then most boys would! we found marble slab- the equivelent of cold rock and also found the amazing free tast testing policy, i tried 3 flavours, dans tried 4 and matt won with 6 flavors. love scamming the system....moving on, we went into downtown calgary, and ventured to the calgary tower. apparently its the highest tower in the western hemisphere (once you add the height above sea level!) its pretty cool tho, you get a 360 degree view of calgary, and apparently on a clear day you can see all the way out to the rockies....however as im yet to see them, im not entirely sure they exist! pretty cool is the glass bottom section on the observation level. you can stand and literally look straight down on the city. pretty freaky and it took me a while to go out onto it! anyways, had a pretty sweet day all up and ready for sleep! 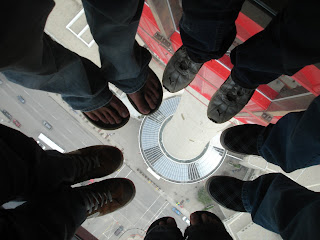 lynda!!
i love u!
and miss u!
im glad u had a fun day with clay, i shall always remember him as smore guy.
love u.
kristina.

That glass floor is pretty mad. I'd be scared it was too thin.

Lynda
on the move,, United Kingdom